Angelica and Gustavo Nechar moved many times in Brazil, where they were born and raised, and in France, where their careers flourished and they owned a Haussmann-style apartment in the 17th Arrondissement of Paris. But it wasn’t until Mr. Nechar’s work as a human-resources executive brought the couple to Houston in 2013 that they realized all of their previous homes had lacked one enticing thing: a design conceived just for them.

The expansive suburban house they bought upon arriving in Houston, they decided, wasn’t quite right. For one thing, it was too big for a couple with two adult sons. And it was too far from the action of the city, which had pleasantly surprised them with its cosmopolitan vibe and cultural offerings, even after 13 years in Paris.

What they wanted, they realized, was to build a house in the city that would support an urban, walkable lifestyle.

“After 30 years of being married, we decided to build our own house for the first time,” said Ms. Nechar, 48, who left her job as a lawyer to open a showroom for the Brazilian furniture company Etel around the same time.

Added Mr. Nechar, 55, “We had always been moving and buying houses from others, and living in places that didn’t have our soul.”

They wanted to be able to entertain friends in style. “We love to welcome people into our house and to cook, which we learned in France,” he said. “When we talked about our house, we wanted a place where people would feel good about being with us, sharing a meal or a nice glass of wine.”

In 2018, they found a tired bungalow on a desirable midblock lot in the Montrose neighborhood, within walking distance of the Menil Collection museum, the Rothko Chapel and many restaurants. They bought it for about $550,000, with plans to demolish it and start fresh.

Their search for an architect to conceive the house led them to StudioMET Architects, after they’d admired the boxy, modernist homes with long, flat roofs and plenty of glass that the firm had built in Houston.

“A contemporary house — that’s what we wanted,” Ms. Nechar said. “We didn’t want to play like some people here who build houses like castles.”

By the end of that year, StudioMET had designed a four-bedroom, 3,800-square-foot house with an L-shaped footprint, and had filed for a building permit.

“They wanted it to be somewhat subtle — they didn’t want a big statement from the exterior,” said Stephen Andrews, a partner at the firm. The two-story design, which has an upper level suspended over a poolside patio and outdoor kitchen at the back, aimed to maximize natural light and connections to the outdoors, he said, while preserving privacy from the street and the neighbors.

But as soon as the plans were finalized, the Nechars began having doubts. They worried that the house might look too much like the architects’ other projects, when they wanted something unique. So the couple called on Meedi Hidalgo, a local interior designer, for a second opinion.

“I saw this was a really wonderful opportunity to highlight their cultural background and personalities,” Ms. Hidalgo said. “I wanted to really capture their culture and give some emotion and poetry to the space.”

She not only provided guidance on furniture and finishes, but also suggested a few architectural changes. Studying the midcentury-modern designs of Brazil, she concluded that the house should have some sensual shapes.

“Brazilian midcentury design was dominated by Oscar Niemeyer, who really loved the curve, and women,” she said. “So I decided that we should try to bring in curved lines as much as we could.”

Inside the front door, Ms. Hidalgo changed a straight staircase into a sculptural, curved one with open treads. She added another big sweeping curve where the ceiling drops between the living room and kitchen. Upstairs, she replaced a rectangular pivot door to the primary suite with a pocket door inside an asymmetrical arch. And in a nod to the couple’s time in France, she added a floor-to-ceiling, wood-and-brass screen from Paris-based Red Edition between the kitchen and dining area.

She also sought to add appealing textures and colors. Where there were plans to use a standard brick on exterior walls, she pushed for a thin, glazed Italian brick that wraps from the exterior to the interior of the house. For the living room, she commissioned custom concrete panels adorned with abstract shapes, including one that rolls back to reveal a television.

In the primary bedroom, she installed dip-dyed wool curtains in a watery blue from Holly Hunt. In the primary bathroom, she used large-scale porcelain wall tile, for the look of worn plaster walls.

By the time the house was completed in April 2021, the Nechars had spent about $1.3 million, confident that they had created an inimitable home. “It’s a project that really embodies who we are, and it’s just phenomenal,” Mr. Nechar said. “We’re very happy to have accomplished this.”

Tue Apr 12 , 2022
[ad_1] Built with sustainability and energy efficiency in mind, this Dallas home has a modern look with natural materials and features that bring the outdoors inside. The property at 5645 Stonegate Road was completed in 2020 and has plenty of environmentally friendly features, like Tesla solar panels, drought-resistant landscaping and […] 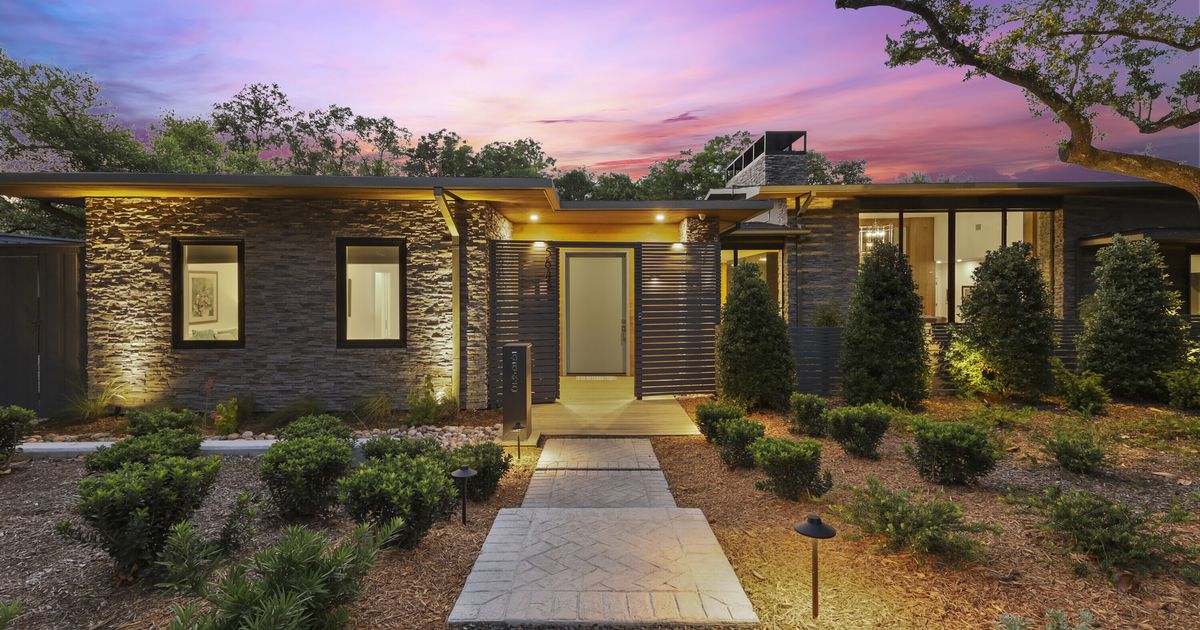