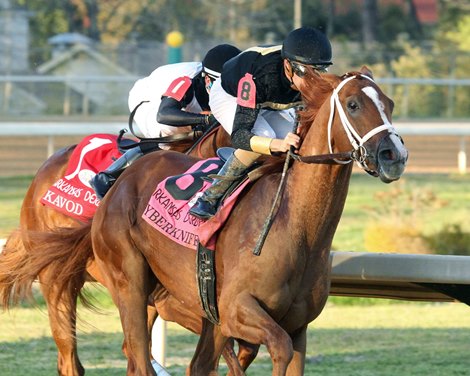 Gold Square’s Cyberknife  has never raced in New Jersey. The closest he has ever come to the Garden State was when he raced at Churchill Downs, some 750 miles away from Monmouth Park.

Yet when Bruce Springsteen’s “Born to Run” is played and the 3-year-olds take the track for the $1 million TVG.com Haskell Stakes (G1) July 23, it will be grade 1 winner Cyberknife who will have the largest and most fervent rooting interest among the hometown fans at the Oceanport, N.J., oval.

That’s all because of Al Gold and a legion of loyal friends he has cultivated in his lifetime.

For about 50 years, Gold, who owns and operates Gold Square, has been attending the races at Monmouth with people who have the same passion for the sport as he does. They have all derived an equal amount of joy from the many days they have spent at the Jersey Shore track, laughing, sharing stories, handicapping, ribbing each other, and pouring a war chest of cash through the mutuel windows.

If he were alive, it’s a sure thing that Damon Runyon would enjoy spending a day at the track with Gold and his buddies.

“I spent 50 years going to Monmouth Park. It was like a second home to me,” the 66-year-old Gold said. “I lived in Jersey for the first 60-odd years of my life, and it will be good to go back and see some friends and enjoy the race with them and my family.”

Now living in Saratoga Springs, N.Y., where he has a home with twin spires on it, and Florida, Gold is counting down the days to the Haskell, as he stands a solid chance of winning New Jersey’s biggest race. Cyberknife, the Arkansas Derby (G1) winner and a $996,000 earner, is one of four grade 1 winners in an expected field of six and could be either the second or third choice behind likely favorite Jack Christopher .

“I can’t think of a race that Al would want to win more than the Haskell, and that includes the Kentucky Derby,” said Ron Riccio, one of Gold’s longtime racetrack pals and an attorney who argued the case before the Supreme Court that brought sports betting to New Jersey and the rest of the country. “Monmouth Park is where his lifelong friends are and his kids are. It’s a big coming-home party for him. Win, lose, or draw, it will be an exciting day.”

For many years, Gold could be found at Monmouth with Riccio and other friends such as Lou Filoso, Allie Squillante, and Tom Luicci, a longtime New Jersey sportswriter and now the director of media relations at Monmouth. Having successfully battled prostrate cancer, and named his Haskell candidate after the surgical tool that helped save his life, Gold is mindful of those friends who will not be there at Monmouth on Saturday.

One of them is the late Bill Handleman, an award-winning journalist for the Asbury Park Press whose love for playing the races had few peers. Handelman, who has a media award named in his honor by Monmouth, passed away in 2010 at age 62, but he still pops up in Gold’s mind during racetrack visits.

“Every time I walk into Saratoga Race Course, I think Bill is still walking in there with me,” Gold said.

The irascible Handleman was involved in many of the hundreds of racetrack tales that Gold can rattle off about the countless days he and his friends gathered at the racetrack. Some involve huge paydays, but the ones that are the fondest memories involve the laughter and kidding over those times when what should have been a big wagering score somehow went awry.

One of them, back in 2006, involved Gold naming horses Handleman and Handlewoman after Bill and his wife, Judy. When Handlewoman was poised to make her career debut for trainer Steve Asmussen, Gold received word from the barn that the filly was poised for a big effort and he passed that tip along to Handleman. When Handlewoman lived up to expectations and won at 9-1 odds, Gold was ecstatic. Then he saw that Handleman, the star-crossed gambler, was muttering.

“Bill didn’t bet the horse to win. He just bet exactas and trifectas and left out the (Todd Pletcher-trained) horse who was the favorite in the race and finished second. He didn’t cash a ticket on the race,” Gold said. “I couldn’t help but laugh when he told me what he did.”

It was experiences like that one that built an unbreakable bond between Gold and his pals.

“I have some friends I talk to every day and we’re always talking horses,” said Gold, who is retired from his successful real estate business and has a stable of about 24 horses with a variety of trainers. “I look forward to seeing them at Saratoga and Monmouth and enjoying the day with them.”

Ricco said Gold’s friendly nature and generosity over the years has been a key ingredient in the group’s staying together for so long.

“He’s a dear friend and enjoys the banter at the racetrack and he has a generous spirit. He always wants to do the right thing,” Riccio said.

While Gold is looking forward to being at Monmouth Saturday with his wife, Hilary, and children Bryan and Danya and their families, he’s hopeful the trip to New Jersey will be less eventful than what was supposed to be a flight to Hot Springs for the Arkansas Derby, the only grade 1 win in the course of 804 starts and 158 wins under the Gold Square banner.

“I missed the race because of trouble with the plane,” Gold said. “I arranged to have a jet take us there, and I hate flying. So I closed my eyes and fell asleep. I woke up when I heard the landing gears went down. I thought we were there. As it turned out, there were mechanical issues and the pilot had to turn around. Everyone on the flight was white as a ghost.”

Having weathered a tumultuous adventure tied to the Arkansas Derby, Cyberknife’s start in the Kentucky Derby Presented by Woodford Reserve (G1) was one of the moments that reflected the years of friendship among the group.

Gold chartered a private jet to fly to Louisville and brought along about a dozen friends and family members on the flight and paid for their accommodations. It was a fabulous four-day trip, with the exception of the race. After winning the Arkansas Derby in his previous start for trainer Brad Cox, Cyberknife chased a brutal pace of :45.36 and was exhausted by the time the field reached the final turn. He finished 18th in the field of 20, some 42 lengths behind the victorious Rich Strike .

“If he stayed back, who knows what would happened in the Kentucky Derby,” Gold said. “The fractions were so out of line from everything he has done before, but at least (Florent Geroux) realized that and basically pulled him up in the stretch when he had nothing left.”

The loss was disappointing, yet it couldn’t sour the weekend for everyone who shared in Gold’s long-awaited debut in the Run for the Roses.

“It was a fantastic four days, with the exception of two minutes,” Luicci said.

After the Kentucky Derby debacle, Cox brought Cyberknife back in the June 12 Matt Winn Stakes (G3) at Churchill Downs, and the son of Gun Runner   rebounded with a determined effort in dueling on the front end with fellow Haskell candidate Howling Time  and prevailing by a nose after a thrilling stretch duel in the 1 1/16-mile test.

“If he shows up and runs his race, Cyberknife will be a player in the Haskell,” Cox said. “He got a very useful prep in the Winn. He only won by a nose but that was a good horse he beat and it was a ways (six lengths) back to the third horse (Rattle N Roll ), who won a stakes next time out.”

Cyberknife, bred by Ken and Sarah Ramsey out of the Flower Alley mare Awesome Flower, was Gold’s first horse with Cox. The two-time Eclipse Award winner would love nothing better than to provide the owner with a second grade 1 win out of the $400,000 purchase by Joe Hardoon, Gold’s racing manager, at the 2020 Fasig-Tipton Selected Yearlings Showcase.

“It’s been great working with Al,” Cox said. “He’s been awesome. He knows the game and watches it all the time. You’ll see him at the track each morning. He’s aware of what’s going on. He’s great to deal with and takes bad news as well as he does good news. He’s a super nice guy. I was really happy to win a grade 1 for him. I didn’t know he hadn’t won a grade 1 before that. It was pretty cool to finally get one for him and maybe there’s more to come. Hopefully, it will be the Haskell.”

If that happens, there will be loud cheers and streams of tears from Al Gold and his crew. And, of course, some unforgettable memories, too. Be it a Saturday with a grade 1 stakes or a mundane weekday, no day at the races would be complete for New Jersey’s hometown favorite without a memory to cherish.